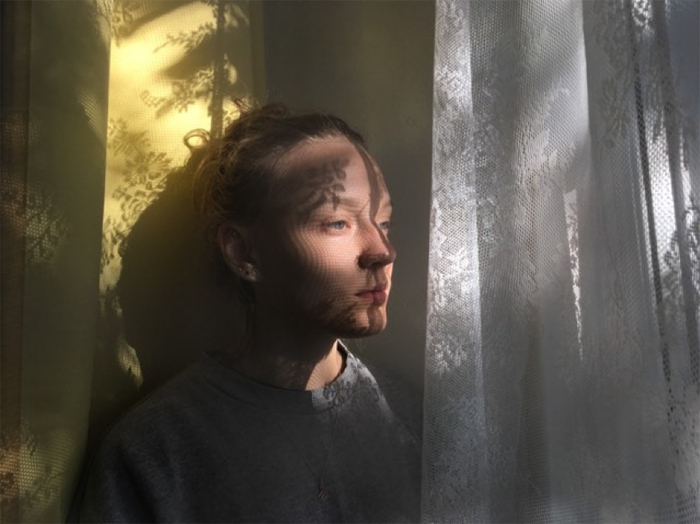 Upon arrival I was greeted by Jofke with a wide open door. I had walked into a large space full of light. It was not only daylight, I discovered quickly.  Jofke radiated a sort of an openness which extended on to me. We talked about psychology and nature and art. We talked about her projects and how they came to be. I felt my comfort zone expanding, and curiosity peaking. And so Jofke indulged me, she explained to me how her Taktila method works, which is a color system that gives insight into all visual concepts by touch. Jofke showed me paintings where she applied the Taktila method, so that visually impaired people can see it too. Not only that though, sighted people can gain insight and experience it in a whole different way, as I soon discovered. At this point Jofke suggested that I close my eyes and she guides me to a painting I hadn’t seen yet. So I closed my eyes and walked, I stood infront of a painting and touched it. Oh the irony, I’ve always been told not to touch the art. But here I was, touching it. For the first time in a long time I had to cut off the sense I rely on the most. I couldn’t see. And yet as I touched the painting I tried to imagine what it looks like. After about 10 minutes I started experiencing what i was touching, I felt the contrasts between the textures and the memories that came with feeling by touch, it indulged my fingers and the sense to touch. Jofke guided me by asking questions and making subtle comments.

I was there to take my time to experience touch. I opened my eyes and saw the painting entirely different than what I had in my head. It wasn’t good different, nor was it bad, but it definitely made me feel. Jofke lead me towards the black cube, a completely dark room with paintings on the walls and a statue in the middle. I went in alone and closed the door behind me. I was now standing in a room and I could not see so I started to touch. It was very peaceful and all of a sudden I was overwhelmed. I was pushed to explore the sense that I know so well, yet barely take the time to notice. Now it was the opposite, all I could notice was touch. And there was a lot to explore. My time perception squiggled and I rushed through the textures. After having been there for some time I came out and opened my eyes. It was an experience immensely different from my everyday life and I wondered whether Jofke works with smells as well. On my way out of the studio we briefly stopped at the smells station. I opened a box, with my eyes closed of course, and took a breath in. It smelled like summer in a pine forest and the hot wood in a sauna. It smelled like sap and childhood. What’s so interesting about this is that Jofke’s work forced me to slow down, to not think about the immediate associations with textures or smells, but to focus on how and what it makes me feel. In some ways it’s therapeutical, every person will experience the same smell or texture differently and that’s the beauty of it.

The rest of the day I felt grounded, I don’t know if it was due to a change in scenery or because I had found somebody who is exploring art as therapy or simply because I shifted my attention to how and what I feel.